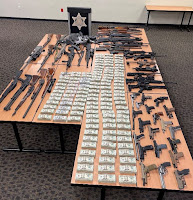 Sage, CA - On Tuesday, February 16, 2021 investigators from the Riverside County Sheriff’s Department’s Marijuana Enforcement Team (MET) served a search warrant at an illegal marijuana cultivation operating at a private residence in the unincorporated area of Riverside County known as Sage. The search warrant was authored in response to citizen complaints about the residence.

Upon arrival, investigators located several outbuildings containing marijuana plants in various stages of growth. Additionally, investigators located a cannabis edibles manufacturing operation on the property. A further search of the property turned up a large cache of illegal weapons and over $700,000 in US Currency. Employees of the operations were detained, questioned, and later released. The investigation is ongoing.

On Tuesday, July 7, 2020, family members of 73-year-old Rosario Garcia reported her missing from their residence in Hemet. Garcia was last seen driving her silver 2016 Nissan Altima away from the residence.

On Thursday, July 9, 2020, deputies from the Palm Desert Station responded to the 70100 Block of Hwy 74, Mountain Center in regards to Garcia’s vehicle being located in the area. The vehicle was located and it appeared to have become high centered on the rough road. Garcia was not located in or around the vehicle.

A search by Desert Sheriff’s Search and Rescue (DSSAR), Riverside Mountain Rescue Unit (RMRU), bloodhounds and Riverside County Sheriff’s Aviation Unit was conducted, however, Garcia was not located. On Saturday, August 8, 2020, an additional search of the area was conducted. RMRU and Hemet Station personnel searched the mountainous area but were again unsuccessful in locating Garcia. 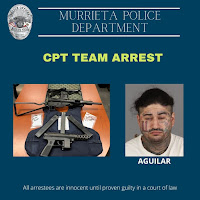 Murrieta CA - On Wednesday February 10, the Murrieta Police Department Community Policing Team (CPT) were conducting extra patrol in the shopping center near Whitewood Road and Los Alamos Road when they contacted a male in the parking lot.

During the search of the vehicle, the officers located two guns, extended magazines, ammunition and a significant amount of methamphetamine and M30 fentanyl pills.  Drey was arrested on several weapons and narcotics related charges and booked into the Cois Byrd Detention Center. 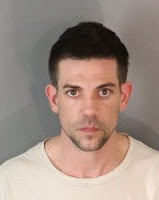 Corona CA - On Wednesday, December 23, 2020, the Riverside County Anti-Human Trafficking Task Force (RCAHT) received a referral from the Hemet Police Department regarding the possible sex trafficking of a minor. During the course of the investigation, investigators found the minor was being sexually exploited for money via social media/internet. One of the men having sexual contact with the minor was identified as Steven Rawley, 35, of Corona.

As the investigation continued, investigators found a YouTube video posted on February 19, 2019 by Arizona Predator Prevention (APP), a citizen watch group, of an incident that occurred in December 2018 in Mohave County, Arizona.

In the video, Steven Rawley contacted an undercover account online which had been set up by APP. The undercover account posed as a fake 15-year-old girl. Rawley propositioned the undercover account for sexual acts, and even after being informed several times that “she” was 15, Rawley set up a meeting for sex. The video shows the citizens confronting Rawley about the online conversations in a parking lot.

Idyllwild: Son arrested for murder of his father

Idyllwild CA - On February 10, 2021, deputies from the Hemet Station responded to the 53000 block of
Country Club Drive to investigate a report of a shooting. When deputies arrived, they located a deceased adult male who appeared to have been shot.

The victim was identified as Adrian David Denava, a 50-year old male from Idyllwild. Investigators from the Central Homicide Unit and the Hemet Station were notified and have assumed the investigation.

The suspect, later identified as Adrian Denava Jr. a 24 year old male, fled the area but was later located and arrested for the murder of his father.

This is an active investigation and anyone with information regarding this case is encouraged to contact Investigator Gonzales of the Central Homicide Unit at (951) 955-2777 or Investigator Atkinson of the Hemet Station at 951-791-3400.