Temecula, CA – Tonight’s news has a little something on the human interest side and something for the hipster/geek music crowd that might be the next big thing for Temecula; an app to showcase your scene/club/casino/water park to the owners of ‘smart phones’. It’s the coming thing, well, actually it’s here. I had friends who were trying to bust into the app market before it blew up and that was at least two years ago.

But first the nuptials. Best Wishes to Mr. & Mrs. James Messina as of May 19th sometime in the afternoon. James, for readers who don’t know the back story of The Vault, is the current owner of Temecula Sounds, which houses The Vault all-ages music venue.
CLICK to read more»
at 11:20:00 PM No comments:

Temecula, CA – It isn’t often you see a Disneyland band in Temecula. Normally you see a ‘Disneyland band’ at Disneyland, especially a band that plays Disney classics. But the guys of Suburban Legends took a day off after their ‘day job’ to come down to The Vault Saturday night. On April 3, 2012, the band released its fifth full-length album, Day Job. It includes new songs, four re-recorded tracks from Going on Tour, a collaborative track with rapper Lyrics Born, as well as two Disney covers, "Under the Sea" from The Little Mermaid and "I Just Can't Wait to Be King" from The Lion King, which have been long-time staples of the band's live performances. For anyone who read Vanessa Franko’s short piece about the Skatastic Saturday show at The Vault and wondered, eh? Well, I’m here to fill in the blanks.

In a nutshell, everyone who knows Suburban Legends, the rock/ska show band that has played at Disneyland for over ten years, and saw the Vault show is glad they did. The entire night was solid but there is no doubt that headliners Suburban Legends lived up to that title in trumps. However, SL left impressed with our little town scene too.
CLICK to read more»
at 2:11:00 PM No comments:

THE HUMAN REVOLUTION IN A CONCERT EVOLUTION

Temecula, CA – The Temecula Calendar in a unique opportunity, presents for the first time, The Human Revolution, performing an interactive online concert where you can hear your favorite songs and communicate with Human, the innovative collaborator behind the tribal band, and others from around the world, right from your computer! The concert will take place on Tuesday, May 8 at 10pm EST, (that's 9pm central, and 7pm on the west coast). Since there are no venue fees to be concerned about, the ticket price is super low, just $5 and the money goes directly to support Human in anti-GMO mission to inspire Americans to grow their own food! Buy your tickets here to join in the fun! You can witness what I saw at Club Zanzibar, see Feb stories section and take part in a unique live event here at the Calendar.
CLICK to read more»
at 5:57:00 PM No comments:

FFHL NFL DRAFT RECAP – ROUND #1 AND SOME OTHER STUFF

Hello Football Fans,
I tried to summarize each team's draft briefly, and it's mixed in with the first round draft selections.
After the draft stuff, I've got some other NFL and college football updates that may interest you.  Check out the end of the letter.
Enjoy,
The Fugitive Commissioner of the FFHL, on the lam from the gambling police
CLICK to read more»
at 3:14:00 PM No comments:

BODYSNATCHERS IN OUR MIDST

Temecula, CA – There is an upside and a downside to being ‘a voice in the desert’. The upside is that sooner or later you attract an audience. The downside is that the audience you attract validates the point you were trying to make, a point you hoped you were wrong about. When I first started to add political stories to the music show reviews, I wrote about hemp, not knowing how big the medical marijuana field would become. I wrote about the downturn before the ‘Great Recession’, political corruption before the term ‘oligarchy’ gained widespread use, and CODEX before the Label GMOs campaign marched a step. Now another past story gets validation from a second witness; this time, a print source, a very conservative print source at that.
CLICK to read more»
at 2:22:00 PM No comments:

DOWN FOR THE COUNT

SNAP, CRACKLE, AND MUSH
Temecula, CA – Welcome back for Part II of my Two and a Half Cats story POV of the Occupy May 1st (#M1GS) event. For me Occupy is one big top that holds all the acts of the economic mural ‘the box’ in OLA showed. Once again two separate events happened back to back in the push-back revolution against ‘the System.’

On May 2nd a crowd of 300 people with just two police officers and half the TV coverage in attendance, witnessed 232,409 names, LA’s portion of the 971,126 collected names to place a grassroots anti-GMO inspired initiative on the November ballot, get turned in. On June 20th, the tally results are expected and the initiative number will get issued in July. The following report gives an embedded ‘gonzo’ POV of the event which was orchestrated with the precision of a Swiss railway conductor. In the terms of organization, the anti-GMO crowd represent the Yippie wing [minus the violence] of the Occupy Movement, though at present the two groups haven’t been formally introduced. The idea to ‘occupy’ your existence in the face of federal intrusion is a war being fought on many fronts. We are all-one, or none.
CLICK to read more»
at 6:40:00 PM No comments:

TWO AND A HALF CATS 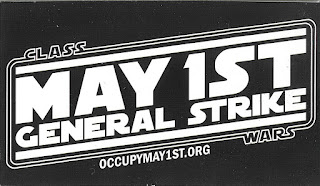 Temecula, CA – Before I drift off and rest my weary bones from my latest Occupy/Activist adventure, as MJ Green and I share a few collective memories, I am hoping to put at least half of the latest saga down. I call the whole adventure, Two and A Half Cats because though I was hoping trains and bus surfing, I met almost three new kitty cats along the way. If you know anyone who has ever married a witch, you know a fondness deepens for felines after that. They become like runes to a Roman.

Southwest Riverside County- Weeks after she claims to have rejected the endorsement of SOMOS Republicans, Candidate Melissa Melendez is still enjoying the support of open borders group SOMOS Republicans.

Over a month ago, Candidate Paule called for Melendez to publicly deny the endorsement of SOMOS Republicans and defend conservative principles with no response from Melendez. While Candidate Melendez claims to have rejected their endorsement, she is still receiving publicity from the group on their website and she has provided no solid proof that she has even contacted the group to renounce their endorsement.

This is my dinner tonight, thought I would share the recipe with you if you are doing the 'meatless monday' thing or, like me, are vegetarian.

Grill for 6 min on each side, top with your favorite cheese and cover with a metal bowl for 4 more min to melt the cheese. I added a bit of my gluten free homemade bbq sauce on top of the cheese. See more pictures after the jump.