IN YOUR BLUE DREAMS

Temecula, CA – Several days ago in a LLWAP story, I dropped a purple pill consisting of a gel cap filled with cannabis extract. Though I have eaten pot edibles before, with varying degrees of getting baked from them, kind of a crap shoot as they say, this was the first time ingesting a pill containing liquid pot. In a way I wish my cousin Abby was still alive for we had several great debates over pot (ingestion) and Genesis 1:29-30. The demagoguery against cannabis is the devil’s second greatest trick [see Memoirs of Mr. Pete & Mary Jane Green, available soon on Amazon].

Awakening and with no breakfast, I swallowed one of the purple pills I had been given from Ryan at 7:45 AM. The following is my report and conclusions.
CLICK to read more»
at 1:55:00 PM No comments:


Hello Football Fans,
There is not much fluff in the attached newsletter.
The college season is 10 days away, and there are some preseason rankings, rule changes, coaching changes, selected games for the first week starting August 30th, plus some minutia for your reading pleasure.
The Fugitive Commissioner of the FFHL, on the lam from the gambling police.
Following is the Preseason Top 25 according to the USAToday Coach’s Poll, with number of 1st place votes in parentheses (the Associated Press Poll – sportswriters – is not out yet).
CLICK to read more»
at 8:43:00 PM No comments:

Hello Football Fans, The NFL preseason has started, so this letter is almost exclusively NFL news and minutia and other good stuff such as three quiz questions. I don't have the coaching changes listed yet (later), but a quickie summary of the rule changes is attached and may interest you. I'll be sending out a college football "kickoff" letter soon, as the season starts in a few short weeks.
Enjoy, The Fugitive Commissioner of the FFHL

Now that the 2012 Olympics are history, and with all due respect to those incredible athletes, I’m moving on to the 2012 football season… after this.  Here’s a brief summary of the medal count for the top countries (before “winning” athletes lose their medals after positive drug tests):

THE SECRET 60 YEAR WAR THAT ISN’T NEWS, YET

Temecula, CA – It’s an oft told tale – a migrating bunch of tribes who are related settle down in a wasteland that no one else wants at the time only to now be discovered that the land sits atop tremendous mineral wealth. Balochistan illustrates another side to Pakistan, but a side that is common in all governments now running the world collectively, seizure of material assets in the guise of promised economic growth. This fairly short video is worth watching because although not filmed emotionality, the genuineness of the 47 minute news report stirs the emotions. Remember too that the U.S. and Pakistan have a dubious relationship in the ‘war on terror’ in Afghanistan, plus Pakistan has nukes. Enjoy.
CLICK to read more»
at 4:41:00 AM No comments:

2:09AM, THE PURPLE PILL REQUISITE

A BLAST FROM THE PAST

Temecula, CA – Well Sports Fans, it’s been a while since everybody’s favorite, L.L. WAP* made an appearance as a news source. As I look at the round plastic container sitting on my office desk as I type this story, the one that holds 5 gel caps with a purple liquid inside them, I’m wondering the effect from ingesting one sometime tomorrow.

Per L.L. WAP this story begins with a tip phoned in to me after midnight, waking me up from a sound sleep. And I have to say that normally I wouldn’t consider taking something that I received from a total stranger and his girlfriend in the middle of the night, except this couple came to me through 3 connections; the DBS Boys, Mary Jane, and Keirah Ann Robbins.
CLICK to read more»
at 4:21:00 AM No comments:

THE GMO TIME OF OUR LIVES

FOR LOVERS OF LLOYD PYE, OOPAs, AND THE BIBLE

Temecula, CA – Today we feature another look at the matrix and how what we are taught is part of ‘the plan’ to keep us sheep, grazing merrily upon the empty calories of modern society, reinforced by one of my favorite shows, The Big Bang Theory. You see, The Big Bang Theory reinforces what we were all taught in school, which is the bible is nice poetry [implied since the bible was rarely mentioned] but we have all these dinosaur bones that are millions of years old so…

Along with that implied scenario is the notion that only hicks, dumb hillbilly Christians, now modern ‘tea bag’ types believe the world is only a few thousand years old. While no one wants to be out-dated in their beliefs, given actual oopas [out of place artifacts] and the video report by Dr. Lloyd Pye [see archives here for its entirety], you start to wonder if we have indeed been fed a GMO history. After the jump, an hour+ video offers more evidence that we have indeed been drinking the kool-aid.
CLICK to read more»
at 2:23:00 AM No comments:

MELTDOWN MUTATES INSECTS AFTER RABBITS A YEAR AGO

Temecula, CA – The nuclear accident allegedly caused by H.A.A.R.P. (see Jesse Ventura/youtube) at Fukushima and covered here in the Calendar heavily last spring and summer didn’t gain much traction, my publisher said at the time. I told him it didn’t make any difference because sooner or later the world would catch up to the reporting of the story. The radiation hasn’t stopped being released simply because the US news has moved on to the next ‘if it bleeds, it leads’ Romney/Ryan story.

One of the most disturbing aspects of the Fukushima radiation story was the government’s lack of concern, real concern for their citizens who lived in close proximity to the crippled plant even after mutated bunnies were discovered by farmers (and reported here, see archives).

Recently it has come out that the government in Japan lied to the citizens about the deadly potential of Fukushima, and continues to allow people to live in harm’s way. Though the rumors of Tokyo being evac’d and a backup Tokyo planned at an extreme southern location remain ungrounded, the government did bailout TEPCO making the Japanese people pick up the bill for the devastation. The government and the same people at TEPCO remain in place despite the treasonous propaganda, and life moves on – not quite!

'Researchers in Japan have found signs of mutation in butterflies, signaling one of the first indications of change to the local ecosystem as a result of last year's nuclear accident in Fukushima, according to one of the first studies on the genetic effects of the incident.

Joji Otaki from the University of the Ryukyus in Okinawa, who led the research, collected 144 commonly-found pale grass blue butterflies 2 months after the March 2011 accident at the Fukushima Dai-ichi nuclear plant.

Initial results indicated that roughly 12 percent of the butterflies showed signs of abnormalities, such as disfigurement in their antennas, smaller-sized wings, change in color patterns and indented eyes, Otaki said.

Even more alarming, when he collected another 238 samples just 6 months later he found that those abnormalities had increased to 28 percent and the mutations had doubled to 52 percent in their offspring.

Pictured below is the before/after comparison of the butterfly species. 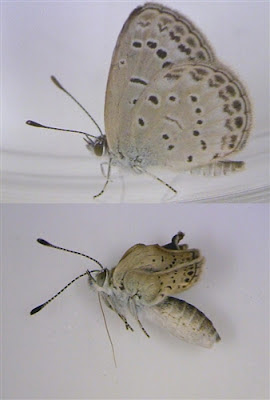 Otaki, who has been studying these butterflies for 10 years to analyze the effects of global warming, said that butterflies are the best environmental indicators because they are widely found in almost any environment.

"But since we've seen these effects on butterflies, it’s easy to imagine that it would also have affected other species as well. It’s pretty clear that something has gone wrong with the ecosystem,” he said.

However, at the same time, he also warns that because each species’ sensitivity to radiation varies, it was too early to immediately apply these finding to humans. But what is clear, said Otaki, is that the genetic changes found in these butterflies indicate a disruption in Fukushima's ecosystem and that more study is needed to learn the full scope of the effects of the radiation released into the environment.

[Editor’s note: Who cares if the Liberty Quarry project is finally defeated if San Onofre is mutating our butterflies. I urge the Quarry fighters to contact and align efforts with our western community fighters and others affected in the 50 mile radiation zone, see zone map in previous story. Arata Yamamoto is story source, all emphasis – Ed]

Temecula, CA - It is said that “history is written by the winners.” That is evident when you talk to a Muslim about history, even Bible history. If you are familiar with Moses and David in the Old Testament and discuss their view, which was formed some 600 years later when the prophet made the pagans embrace a ‘one God’ dogma, you see this phenomenon. It is this ‘forget where it comes from, let’s spin it like ours’ mindset that is evident in the new show HuffPost Live format ripped from the pages of Occupy’s citizen journalism format. How do I know? I read many a comment and up to date news report about Occupy that way. Now a female talking bear has used the same format for her own gain with nary a nod to where it came from. Oh Arianna!

One of the first shows featured John Cusack talking politics. Peace Out.

Temecula, CA – The latest addition to the live music scene is a rendition of the Java Joz days.

For the new folks, Java Joz was the place where the underground music scene grew to maturity from the Madlins days of middle school/first year college demo. From Java Joz came Jupiter, Bipsy, Nice Day [opened for Foghat in Old Town], and the birth of Ivan Promotions. The Vault as we know it came from those Java Joz daze, days.

In an effort to bump the old scene up a notch as we are all over the age of 21 now, Ivan Promotions is hosting a local music set night at Bratt’s, the newest hip over 21, not yet gin & cat food demo, spot to open. The prime location at the Ynez & Rancho California intersection in the same corner Target Mall section as Claim Jumpers and Roundtable Pizza assures Bratt’s of high visibility.
CLICK to read more»
at 11:41:00 AM No comments:

“WHEN THE CULTURE DIES, THE PEOPLE DIE”

Temecula, CA – In the waning days of Occupy Los Angeles, Lisa Schwartz and Jim Vallely approached me with a petition for membership into the Western Service Workers Association. Intrigued I listened to their spiel, noticing Lisa’s sharp, bright eyes highlighting a can-do attitude and Jim’s slight ‘magically delicious’ Irish brogue. They represented a neighborhood self-help organization. Remembering my old political involvement in ‘Naptown’ (1971-72, see soon-to-be released ‘Memoirs of Mr. Pete & Mary Jane Green’), I signed on, and then promptly forgot all about everything as the next thing at OLA caught my attention. But we all know the Force is with Occupy.

Almost two months after Occupy LA was shut down, Occupy The Courts took me to Santa Ana, a city that I had passed through only while on the freeway. OTC was a dual purpose juncture for me, because Sports Fans, like John Cusack’s character in Runaway Jury, I had a hidden agenda going in.
CLICK to read more»
at 4:13:00 PM No comments: