THE BOTTOM OF THE STOCKING 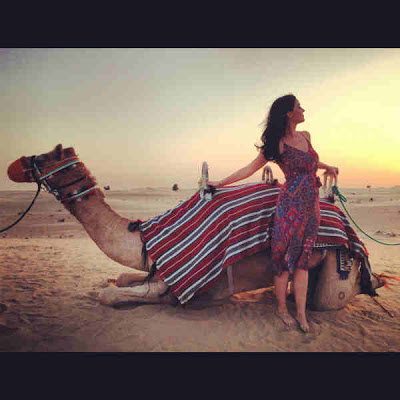 Temecula, CA – We start this citizen journal report with a question. What does the picture at right have to do with Temecula and two of its ex-residents? Clue: Newport Beach.

Some of you may have noticed that the ‘Top Five Posts in the Last 7 Days’ changes to show an older post sometimes, particularly the final story written in the ‘From Victim To Verdict’ series about beloved singer/songwriter Elizabeth ‘Bipsy’ Amirian titled ‘…Killer Sentenced Today’.
While I was away at the OccupyLA/Prop 37 campaigns, a TV show was produced called Unholy Matrimony. Each time the show airs, the Calendar story gets a huge uptick and returns to the Top 5 countdown like a bullet. As I write this year-end report, Bipsy and the story of her killer’s sentencing is once again at the top of the heap, much like the late singer herself.
CLICK to read more»
at 10:06:00 PM No comments:


A KNIGHT FOR TRUTH 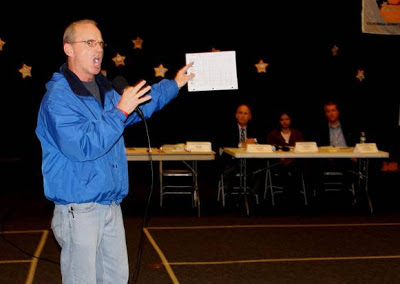 Temecula, CA – In the time since my last report on Autumnwood, a high-end housing tract located in Wildomar, dated Dec. 10th, much has been filled in, including how the site for the homes became toxic and by whom. However before we reveal the culprit and bring you up to date since the 10th, let's take a moment to remind our readers that the reality now dawning on small groups of people everywhere, cough, Liberty Quarry solution, is just a plank in the platform of the Occupy Movement. Like the Biblical Jews who will one day rent their clothes in despair at realizing Jesus was their messiah, so too will folks one day recognize the hidden in plain sight message of the Occupiers.
CLICK to read more»
at 10:00:00 AM No comments:

Temecula, CA – As we drift through this in-between time heading to New Year’s Eve and the end of this year’s holiday season, some friends and I went over to the yearly, newly expanded ‘Bainbridge Falls’ synchronized multi-house music/light display located in a unincorporated housing tract between Temecula, Murrieta, and French Valley between Willows and Nicolas Road. 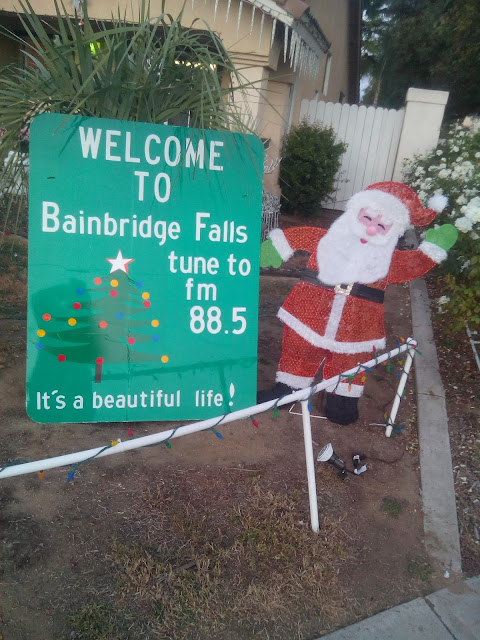 The original circle court neighborhood programmed display has now expanded to include the first block/both street sides, through the intersection opposite the circle court entrance. Able to be seen by hundreds of people who reside above the wired neighborhood, I was not prepared for the Christmas trek destination this year as it brought a lump to my throat.

Tuning the car radio to 88.5 FM as soon as we turned onto Willows and N. General Kearney, the soundtrack to Bainbridge Falls’ Disneyland-style Christmas display came on the dial. Spouting both traditional and contemporary holiday tunage we sat in a line of traffic edging ever slowly to where the lights danced in rhythm to the tempo of the music.

The brainchild of a Christian engineer who shares a Bible study with a mole’s mom, there was a time when the Calendar first reported this local story that you could park your ride in the neighborhood, staying toasty inside your car/truck, as you watched the total soundtrack play down the corridor of homes. A sometimes steady line of looky-Lous would periodically pass as a walking family of bystanders might walk by.

Now, this night in the greatest light display this side of Coachella, we inched along as throngs of pedestrians moved in a style similar to Disneyland creating a ‘magic moment’ of the kind I often describe to my associates who reside outside the valley. For a picture of Bainbridge Falls, an obvious reference to It’s a Wonderful Life, check out the latest issue of Valley News, available around the valley at various merchant drop-off points.

If you are new to the area or new to this spectacular Christmas spectacle, don’t tarry [be a lag wagon] for the lights go out Dec. 31st, 2012. 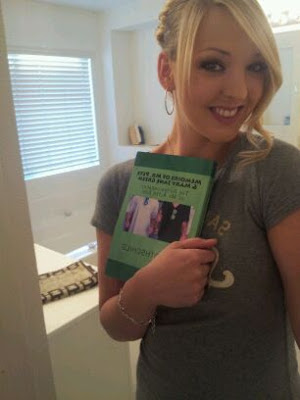 Guest Writer DJ Catter here bringing you the update on my friend PT and his book release. Taking a page from other successful ramp-ups including the Murrieta Best Buy opening back in ’95 on a Friday the 13th, PT announced the official release of Memoirs of Mr. Pete & Mary Jane Green as Doomsday, December 21st, 2012. However, like the old Best Buy, PT also had a ‘soft opening’. Announcing to a limited few that the book would be available on his late mother’s birthday, December 18th, the first sale from the pre-release release comes from ‘that girl’[hat in the air] in the photo.

Elyse Carmichael, the Temecula woman in the picture holding Memoirs ordered her copy on December 18th after her shift at Red Lobster. Promised a January 2nd delivery ["Bummer"], Elyse was surprised to receive her copy of Memoirs on Doomsday, 3 days later. The avid reader told me, "I have 55 pages of my current book, then I'll dive into [Memoirs of Mr. Pete & Mary Jane Green]."
CLICK to read more»
at 12:01:00 PM No comments:

Temecula, CA – There is an old saying that ‘you can't keep a good man down’ and the same might well be said about some Murrieta bands. The Black Swan Theatre, 41655 Reagan Way, Ste. H., Murrieta, CA., 92562, [for LOCALS – off Jefferson between Date and Cherry Streets towards the mountains], 951-696-9800, is hosting the reunion show for My Last Revelation and a ‘reunion’ of sorts for Full Value Entertainment back to Murrieta since selling the Temecula Music Fest to The Vault Concerts.com.
Opening for the December 22, Saturday all-ages show are Eloisa Says and FVE stable talent, Keenwild, one of the first bands I did tee shirts for back in the day. Keenwild and MLR have played many shows together and go back to the days before The Vault.
Doors at 6PM, $10, Keenwild plays at 7PM
CLICK to read more»
at 10:00:00 AM No comments:


THE NEXT LLWAP EMBED ADVENTURE 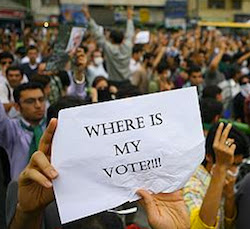 Temecula, CA – “What I want to inform you now is that there seems to be a problem in how they counted our votes. Statisticians are showing that there is a problem in Orange County and believe that as many of 70,000 paper ballots for Yes on 37 were ‘flipped’ to No on 37.  On December 18 this issue will hit the mainstream news TV stations all across California and the nation.

We will need people to help out in the count. Monsanto originally wanted to have seven people present from their team to do their counting but the state will limit both sides to have 3 representatives. I do not know as yet of the duration for recount but I understand that we may work in three to four hour shifts.”

Love to all, John

That’s right, Sports Fans, you get an inside, first hand exclusive scoop of this alleged voter fraud, only here, only in the Calendar.

Temecula, CA – Bang the drum loudly to take away the subjects’, er, citizens’ guns. The news story opin report is going to please some readers and piss off others. Neither is my intention. My aim is to look through the histrionics at the ‘teaching moment’ here, because if you have followed my reporting objective of showing that the world is NOT as taught by the status quo. Status quo says that ‘guns kill people’, however that statement is not true. It is only a slogan for a means to an end, and that end is to turn the populace into being defenseless against the government, the same government that every day makes unconstitutional laws to ‘thin the herd’ and caw-taw the rest. 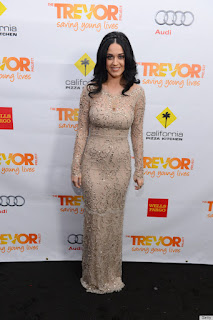 Temecula, CA – Welcome to this weekend edition. There is a lot going on in the hood. For those of you who take the Chinese Daily newspaper, you may think that the sub-headline refers to home girl and T-Town hottie, Katy Perry (Hudson) whose picture graced their front page a couple of days ago. It isn’t. Katy is #2.
I also have an update on the trending story, …Fungus In Autumnwood concerning the DTSC’s decision on whether or not to test for illness culprits coming up this weekend update.
For all those folks who have read the term LLWAP and wondered just what that means exactly, there is an update for finding the definition,
And lastly, for those who would like to get Memoirs of Mr. Pete & Mary Jane Green on my late mother’s birthday 3 days before its announced Doomsday release on December, 21, 2012, that’s here too.

IS THERE A TOXIC FUNGUS IN AUTUMNWOOD 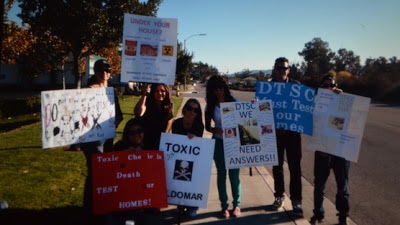 Temecula, CA – Local Wildomar resident Jennifer Marquez-Muniz seeks to enlist the aid of the Temecula Calendar in aiding her cause to get the Department of Toxic Substance Control (DTSC) to investigate for possible chemical poisoning due to numerous people living in the recently built Autumnwood experiencing illness inside their homes. The neighbors are petitioning: George Alexeeff, Director of the Office of Environmental Health Hazard Assessment (OEHHA), Matthew Rodriguez, Environmental Protection Agency (EPA) Secretary, and Deborah Raphael, Department of Toxic Substance (DTSC).
CLICK to read more»
at 9:18:00 PM 1 comment:

Hello underground music fans, Catter here. Since PT Rothschild is giving me a hand on starting my show by use of his CD library from all the music shows he has attended as part of Local Punks, Full Value Entertainment*, Java Joz, Cuppy’s, The Alley [Fullerton], French Valley Theatre, and The Vault Concerts, plus assorted side shows that he has attended, I thought I would return the favor by doing an interview here in my studio about his book release on December 21, 2012 . This is the written text of that interview.