TO LIVE AND EAT IN LA 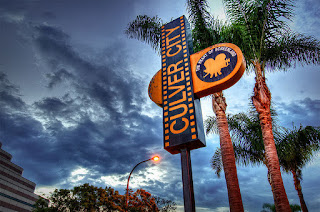 Temecula, CA – The very latest blessing to come out of Occupy LA, an event many who never came to the city hall encampment have dismissed, is a reconnection to the cousin who now lives in the area known as Culver City, a five square mile area of about 39K folks that is mostly surrounded by Los Angeles on the east. Having a book out is something to shout about, especially to kin-folk, so I was all about saying ‘hello’ and what have you been up to since I last saw you as a kid? Turns out, a lot.

Menifee, California - On Sunday January 27, 2013, at 6:25 PM, officers received reports of possible threats of violence to take place at Paloma Valley High School on Monday, January 28, 2013.
By Monday morning rumors had spread like wildfire across social media websites and texts.
Based on the officers' investigation, there is no credible threat to the school.
Anyone with additional information regarding this event is encouraged to contact Sergeant Gilbert Gonzalez at the Perris Police Department at (951) 210-1094.
at 10:19:00 AM No comments:

MAY THE SWARTZ BE WITH US ANONYMOUSLY 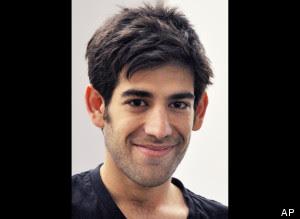 Temecula, CA – With the recent ‘suicide by hanging’ of internet freedom activist Aaron Swartz and his father’s statement to mourners Tuesday during his son's funeral in suburban Chicago that his son was "killed by the government" the sub-headline question comes onto play. Rep. Issa is launching an investigation.

“I’ll make a risky statement here: Over-prosecution is a tool often used to get people to plead guilty rather than risk sentencing,” Issa said. “It is a tool of question. If someone is genuinely guilty of something and you bring them up on charges, that’s fine. But throw the book at them and find all kinds of charges and cobble them together so that they’ll plea to a 'lesser included' is a technique that I think can sometimes be inappropriately used.”

This statement is very creepy in the sense that it describes what a lot of more "restrictive" governments do to suppress dissent in their regimes. This is the sort of thing that could be applied to just about anybody when they take your guns first then turn your social security into a government voucher. So who was Aaron Swartz and why did he so frighten the feds that they might take him out, activist-style, in a reported self-hanging?
CLICK to read more»
at 10:36:00 AM No comments: 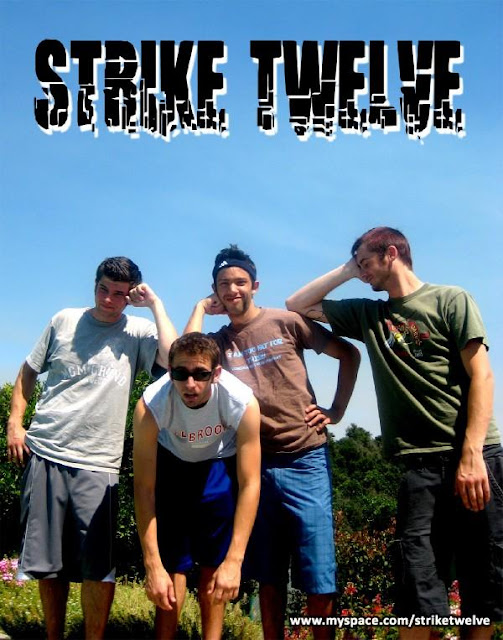 Temecula, CA – The intended result of turning the Temecula bar establishment called Bratts into an adult version of the long gone scene blossom Java Joz took another turn in the right direction with the acoustic show Strike Twelve put on Saturday night. Of course it wasn’t just the usual fly-by-the-seat-of-your-pants, crowd-pleasing performance by the guys that put Bratts closer to the fabled old scene center.
As often spoke about in the days of Java Joz, it was a combination of hot, fresh music and a set of gifted, talented youth troubled with today’s common maladies, like ADHD, OCD, BPD, raised up in Christian homes but bearing as much baggage as a certain scene historian, and some with even more, think Bipsy, the scene Saint.
This combination of unique people fused the original, political, sexually charged pubescent music that sparked in the underground, read local, music scene, creating an escape to wonderland for us all.
CLICK to read more»
at 3:08:00 PM No comments:

Hello Football Fans,
We're in the middle of the NFL playoffs, but I've thrown in some other tidbits.
Enjoy,
The Fugitive Commissioner of the FFHL 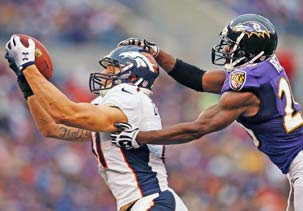 I have already sent out my bowl summary by conference, and I choose to nearly ignore the ugly National Championship game.
Alabama won the title for the second straight year, and an SEC team has won the national title seven straight years.  The Crimson Tide was just lucky to get into the game.  Those OU Ducks let most of the country down by losing at home to Stanford.  The SEC is dominating, and it is nauseating, to put it mildly.

On a more interesting note, one of the six BCS computers still had Notre Dame ranked #1 ….. after they got crushed by the Tide 42-14.  The BCS computer formulas cannot take into account margin of victory.  We have one more year of the BCS, and then for the 2014 season it will be a 4-team playoff with a selection committee to choose the four semi-finalists.
CLICK to read more»
at 1:38:00 PM No comments:

WATCHING YOUR STEP IN LA 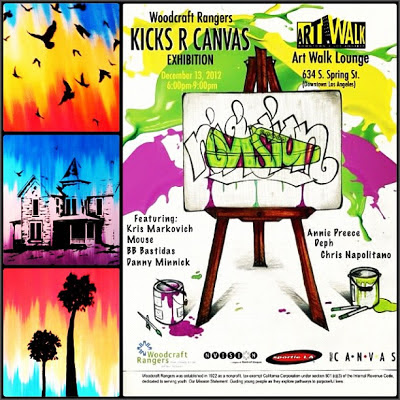 Temecula, CA – Traveling outside T-town to parts hither anywhere adds to your experience but some places leave you with something to write home to mom about, especially in these days of squeezed middle school budgets. Perhaps the next story taken from a recent LA Art Walk experience could be adapted by some enterprising school district to help finance the arts program.

At the Art Walk Lounge, 634 S. Spring (DLA), the Woodcraft Rangers were holding a ‘Kicks R Canvas’ Exhibition, sponsored by Project Canvas, the style maker of the shoes used in making canvas shoe art. Though canvas shoe art comes in two categories, amateur and collector/pro, it is the amateur class, a competition between middle schoolers city-wide, whose shoes are on display this night to be picked as the top 15 pair out of 65 total designs.
CLICK to read more»
at 10:00:00 AM 1 comment:

YOU HEARD IT HERE FIRST

Temecula, CA – In a story dated 12/07/12, the secondary headline read ‘the hottest bitch in town’ with the lead photo showing Katy Perry at the Trevor Awards. Though the headline didn’t refer to our local heroine, Katy Perry, who went to school here under her Christian-given last name, events have added to one extraordinary year for one extraordinary personality packed into a woman whose outward appearance is also her canvas.

Katy Perry has been named the hottest woman of 2013 just five days into the New Year. The singer bested competition from Mila Kunis to clinch top spot on a list of the 100 Hottest Women of 2013 by Men's Health magazine.

I just wanted to drop a quick hello and Happy New Year to all of our readers here at TemeculaCalendar.com - 2013 is gearing up to be a big year for all of us and I look forward to sharing it with all of you as it happens.

As for the Full Value Group - we have new Full Value Entertainment shows coming up, an updated www.BillandJeney.com, and we will be freshing up this site as well. As of 1/1/2013 we have a new venture called Full Value Farms. FVF is local vegetables grown at our 'suburban farm' in Menifee and spice blends and sauces using locally source high quality ingredients. Look for fresh peppers, tomatoes, squash and more coming in March 2013.

HAPPY NEW YEAR from DJ Catter. My friend PT is busy promoting his just released Memoirs of Mr. Pete & Mary Jane Green, available on Amazon and Createspace. However, I was able to catch up with him for a quick New Year’s Eve chat.
DJ Catter: Hello PT. How are you feeling this fine evening?
PT Rothschild: Excited! I haven’t felt this sense of excitement since I was in advertising back in Indianapolis. But this is way more fun. I’m advertising my product, not promoting some client’s. The radio show is coming up, I’m still sending out personal notices – dude, I didn’t know that I knew so many people. Then there’s the upcoming LA NORML fundraiser. Plus I came up with my next book project, so whew!
CLICK to read more»
at 9:31:00 PM No comments: