A RETURN TO THE SCENE OF THE DINE

- BSC, CA – On a picture perfect weather day in Temecula, CA, the Promenade Mall Luna Grill officially opened today. After yesterday's fine Mahi-Mahi plate, it was a pleasure to return to the scene of the dine. 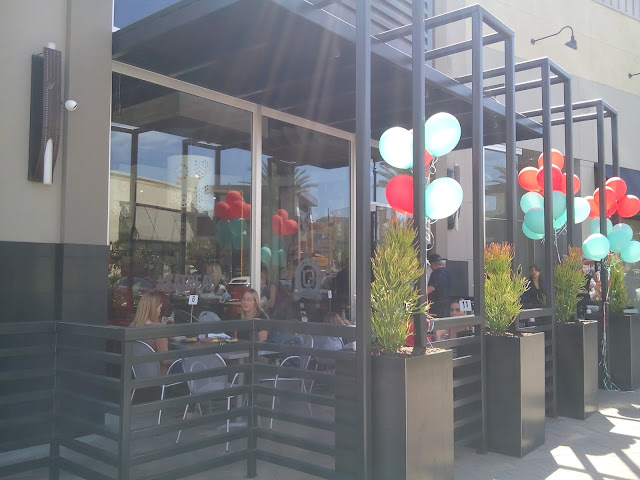 Needless to say, it was as the old soul ballad title “What a difference a day makes” infers, [that nod goes out as a remember when to Virgil Gibson, from a label mate of his as I recall].

This time, arriving around noon, I brought a fellow traveler to the festivities who was peckish with me.

CATCH OF THE DAY

-BSC, CA – If you are reading this column on Friday, September 23, then you can still catch the Temecula Grand Opening of the latest Luna Grill, a healthy food, read no-GMO, no High Fructose Corn Syrup [including their ketchup (Coke products only exception)], cooking oils that are project verified non-GMO, and meat that is free-range, no HGH or antibiotics added restaurant.

Being the local food activist [in print] I received word to get the scoop on the place. I got the mahi-mahi, wild caught, of course, and the salad to be the real surprise catch of the day. 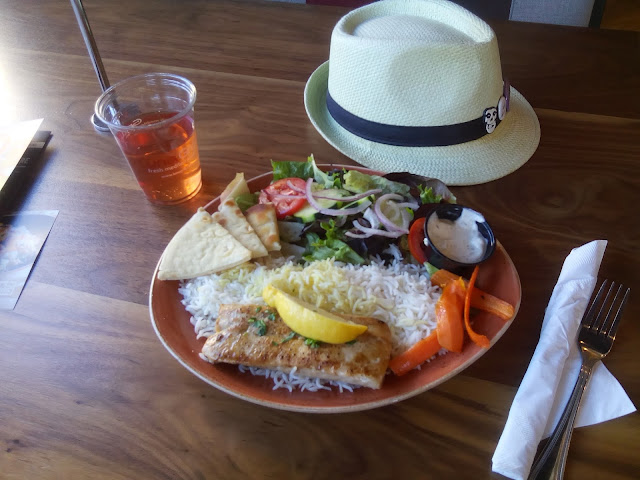 Though the city's ribbon cutting is at 1o'clock sharp, the Luna Grill will be open for business at 11AM, their normal time to open. KATY 101.3 will be onsite from 2-4PM doing all sorts of fun things, and there will be #LUNASWAG giveaways all day long. After the jump, we take a look around and get my suggestion for a cool dessert, kid-style.

FOOTBALL NEWS AFTER NFL WEEK ONE

The first week of the NFL season couldn't have been much more exciting (except for Monday night games). 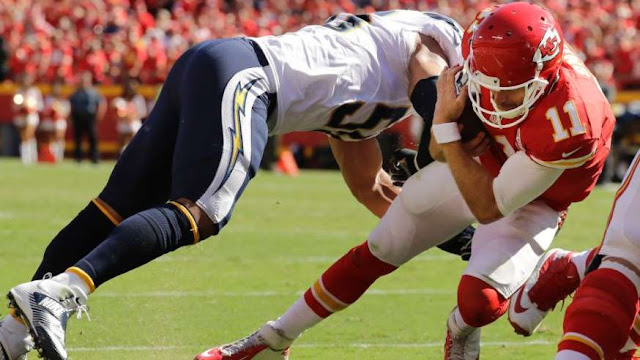 In college, there are four big games this weekend.

And I've got three quiz questions to challenge you, Krueg.


The Fugitive Commissioner of the FFHL, on the lam from the gambling police

BSC, CA – After meeting Virgil Gibson, lead singer of the 50-60s music group, The Platters, at the Guardians of Health Wellness Expo, I decided to put together a music issue and round up all the various music news I know about at present. The cool thing about Virgil is that he lives in Murrieta. After missing out on seeing and greeting Etta James in Riverside, it feels great to have someone from my musical roots be so close, not that we'll play golf or anything. 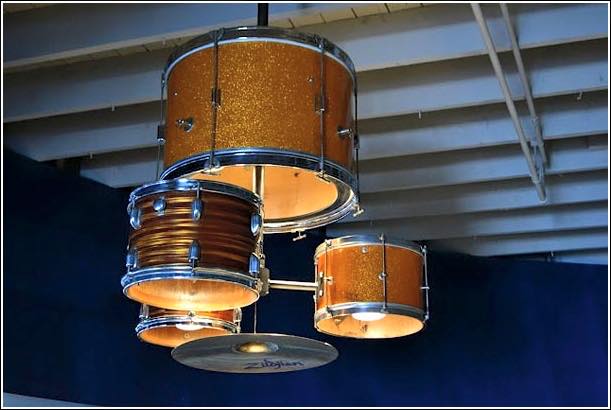 If you like the lead-in picture, well, that's a shot I came across a while back. I wondered where or how I would use it, but I knew I would use it. As soon as I got the news that the Spoonbills were reuniting to play a couple of gigs around Davenport, IA, I said Ah-Ha! You see, it was Max's [Memoirs] brother-in-law in the Spoonbills band who became my lifelong friend and bro. He is their original drummer. In fact, I would put him up there with Dan Bahou [Strike Twelve] in drum-banging technique.

The Spoonbills provided my behind-the-music internship as the band's road manager during the glory days of MTV. I remember hearing Dire Straits' whole album two days after Money For Nothing hit MTV at the basement practice. In those days, folks would gather around any TV displaying the video, it was so entertaining. Today with the neon effects the vid looks a little dated, and of course the use of lyrics that aren't PC toward gays, probably added to the shade this rocker gets nowadays.

Hello Football Fans,
Attached is a summary of four months of off-season activity related to pro football since the 2016 NFL Draft.

Please take an hour or so to get up to speed for the 2016 season.

I've got a short write-up for each team, and I have given you my projected regular season records for each team and guesstimated playoff results (although not too scientific). 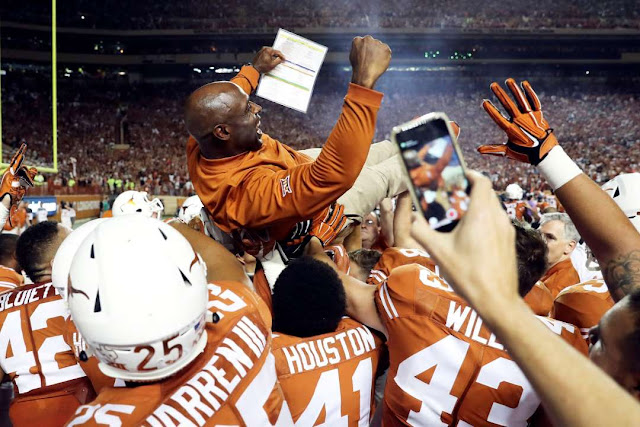 Also summarized are rule changes and other items of potential interest to get the season started.

The Fugitive Commissioner of the FFHL, on the lam from the gambling police

BSC, CA – As cannabis crops head toward harvest and trimming, L.A. starts its latest gathering of NGOs concerning cannabis. This conference starts off today and runs until Saturday. Like the Expo in SD, this one in LA promises another black infotainment personality carrot, Montel Williams, who was famously canned after he stood up for Mary Jane on his network show. For me though, my latest cannabis adventure was a hump evening two-fer; a meeting and a secret sneakeasy.

Also, this was to be another Pot Goonies episode but only featuring a partial crew. Still the night showed promise, and it was a Wednesday, hump day [and night, as I think back to my salad days]. One old song says, “Those were the days, my friend.” And they were, but another song, one by Talking Heads, sums up today's revolution about cannabis. “This ain't no disco, this ain't no party, this ain't no fooling around.” Yep, yep. 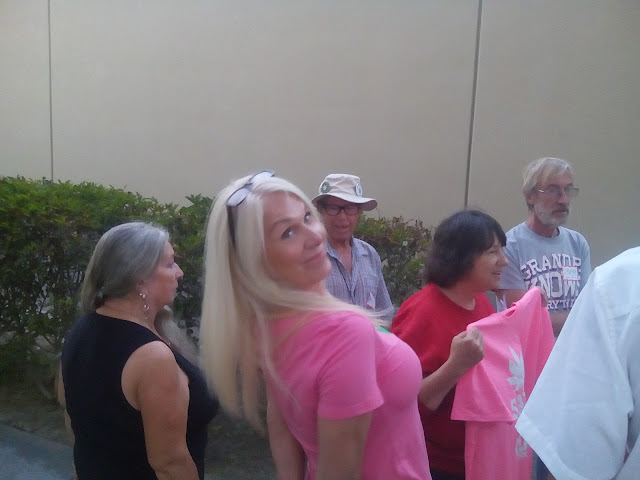 After seeing what the bigger cities of San Diego and Los Angeles have to offer in the way of cannabis events for the average person, a sesh in Riverside was on the list since our PG first stop was at the monthly meeting of Lanny Swerdlow and his group. These folks are the seasoned crowd of local activism, all Bernt Sanders [see the upcoming, Bernie Gets Tutored] supporters, and this month's meeting was the showcase of Libertarian Party hopeful, Gary Johnson, by his former running mate, Judge Grey, of LEAP [Law Enforcement Against Prohibition].