BSC, CA – Tis the season for some Christmas cheer, so in addition to this music review of Nice Day Vince, or 'the Artist Formally Known As', we open this Holiday report with the old 'spot the differences between the pictures' trick, Santa-style. Our key shot below will appear elsewhere in this review but slightly different. Can you spot the two [not 6, we're just too lazy for that, ho, ho ho] changes between the shots? The answer at the end credits. 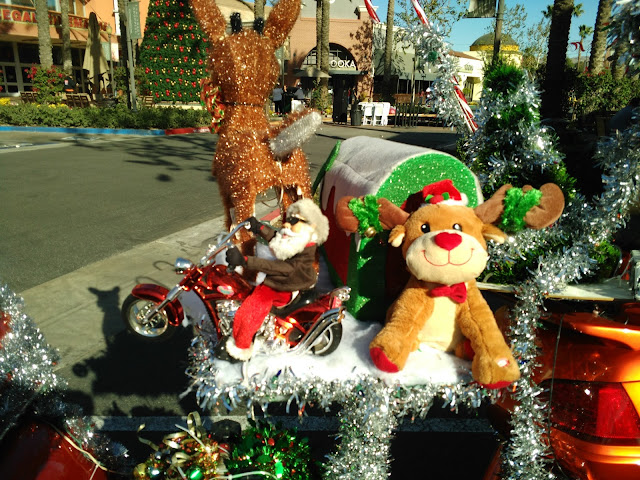 Vince and I go back to when he was called Vincent. It was a Friday the 13th in October that we, along with 60 or so others, opened the Murrieta Best Buy. By that Christmas the new store had plunged a wooden dagger through the catalog store Service Merchandise. That store had an employee who would be a future close friend also, cough, fingerlights.

CHARGE OF THE RIGHT BRIGADE

BSC, CA – If this were a Marvel Comics tale from the 60s or 70s a front cover banner announcing 'This One Has It All!' would be appropriate. There were 'great conversations' and information flowed, as you can see with our Sunday front line of Charlene, Maureen, and Marcia [farthest from camera] key shot. 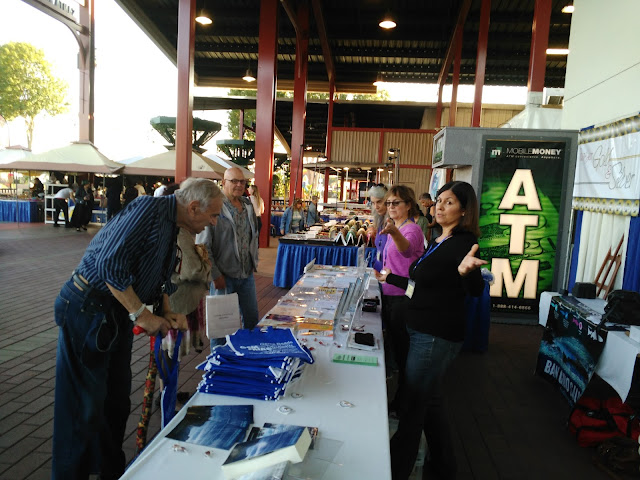 It was the season close for our troop of cultural ministers who bring truth and light to those curious or isolated by what they see happening that their families/co-workers don't. For those folks we are a lighthouse in the stormy sea of television propaganda and ignored real news, a point brought home in Dane Wigington's current DVD on the subject of 'Geo-engineering'.

We also added a fresh walk-on from a previous Costa Mesa Gem Faire, our 'Alien Photos' guy returned, and once again we listened as various Gem Faire visitors related their health encounters with the techno-woes we had posters and literature on. That's real live validation of what we preach. And we learned the real dish on Governor's Brown veto of the cell tower telephone bill by way of Huntington Beach, its first victim. All this and more, after the jump.

Question: How many pedophile elites in the world are there? Answer: 300,000*

This answer and other tidbits of information are what you receive when you stand on the front line of buried facts. And buried facts are what we provide by way of our pamphlets, posters, and official docs, one of which showed proof of a city government out of control, cough, Huntington Beach. 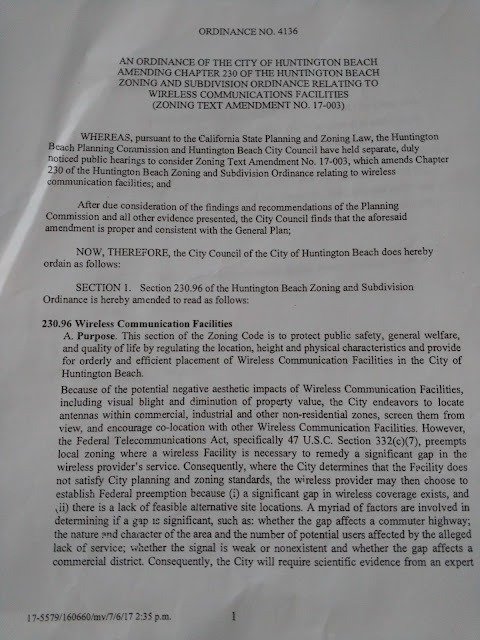 Of course this mindset of unelected royalty isn't rare, as anyone familiar with Temecula's ongoing 'Altair' project for the city's west hills can see. Reported in the Valley News [Temecula coverage] November 24 issue, after listening to the reported impact of more traffic, destruction of the local wildlife environment and negative citizen comments about the new high end area of Temecula, turned their ears off to approve the plan that the businessmen [realtors] wanted. 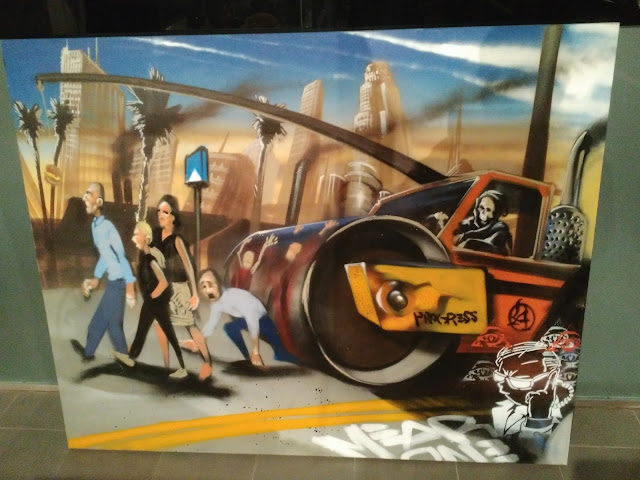 Even Republican Assembly person Melissa Melendez [same issue] commented in Living  Life in the Fast Lane the being on the city council 'was an eye opener for her'. "You feel like you have more control of ... destiny when you are on a city council."

Certainly Zen and Kathleen [Moms Across America co-founders] and Dane [geoengineeringwatch.org] envisioned a different destiny until reality smacked them all on the ass in a wake up call welcoming them into the actual, not the perceived. Destiny choosing them for their resources, inspiration, and drive works the same for our 'right brigade'. Pictured below are John and Katja posing with MAA yard signage touting a successful No-Roundup, toxic-free campaign. John is OC born and Katja hails from East Germany. And here they are. 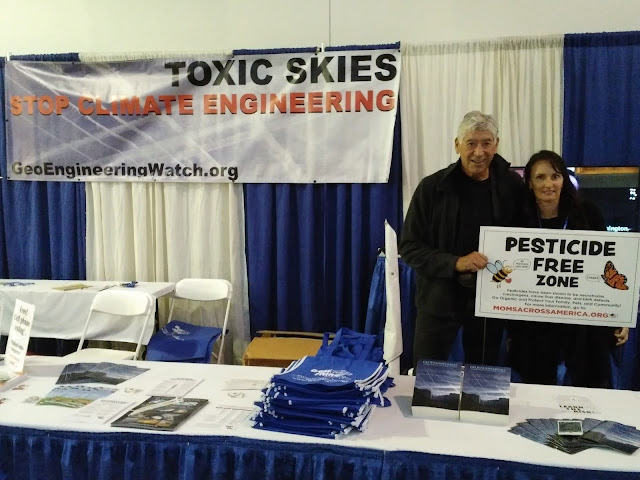 The mounted posters are also a mixture of the expo-style and the homemade. The varied appeal is intentional. Here an older couple gaze at the Geo-engineered streaked sky poster Are We An Experiment? 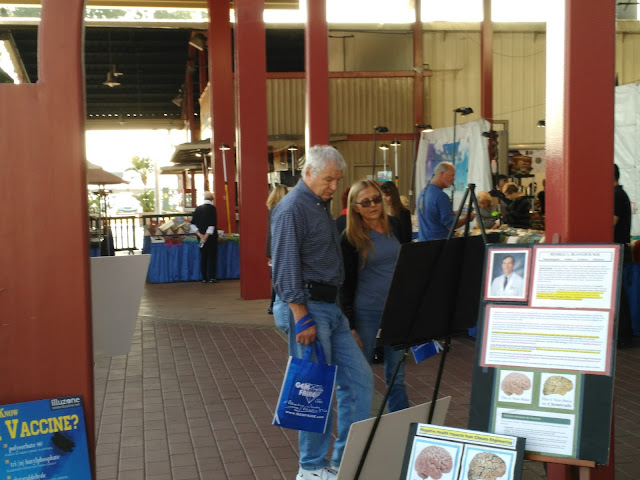 A Faire goer on a Hoveround reads another series on Geo-engineering. 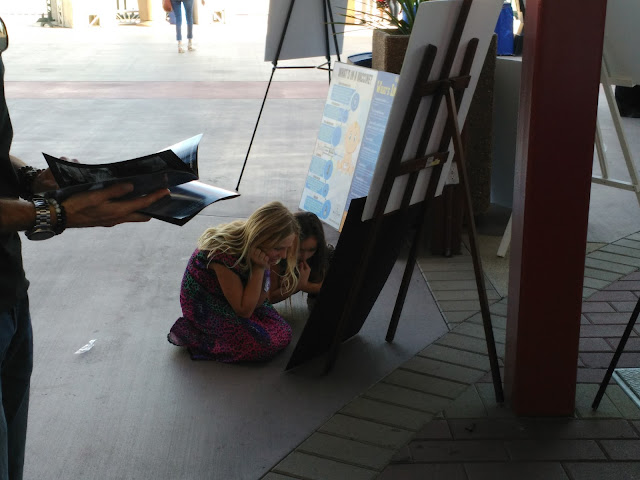 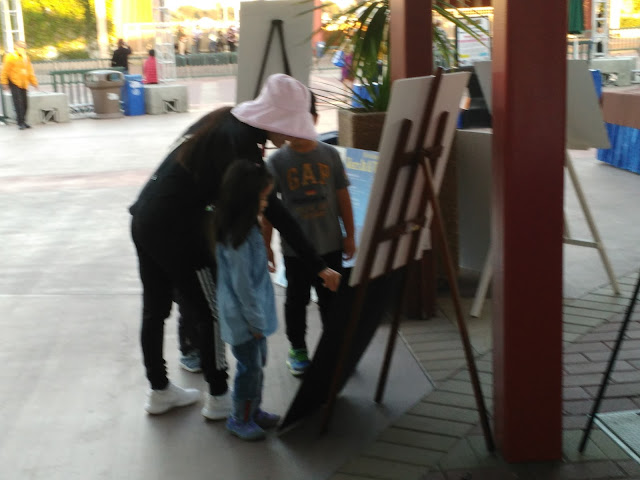 Not being Monsanto-style clones, our right brigade is able to address a wide spectrum of topics because everyone and every mind is under the sky dome. Invariably no one argues the money system but we shed light in the matrix side for those aware of 911, current politics, and sacred geometry. 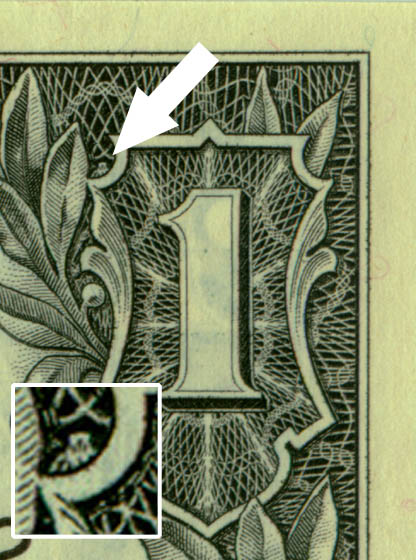 As we reach out in our cultural ministry to comfort the disturbed and disturb the comfortable, our primary goal is youth awareness, for they are the future. Dr. Martin Luther King uttered that same sentiment when I shook his hand as a first time activist, in the 10th grade. I have never forgotten that mantra. 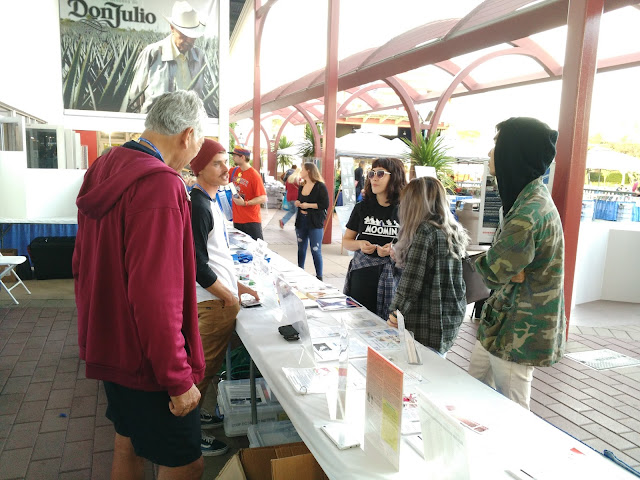 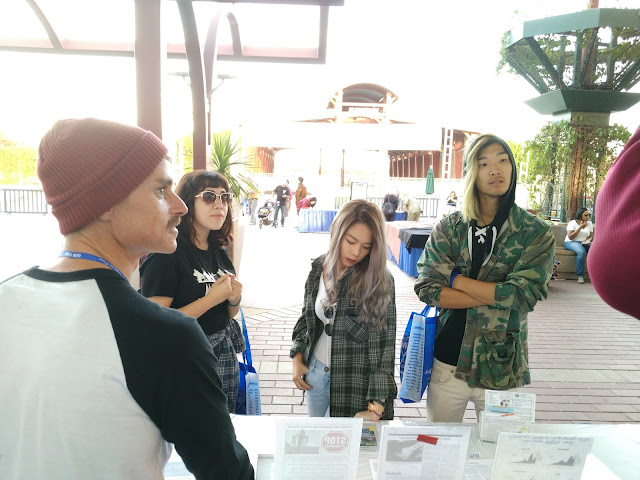 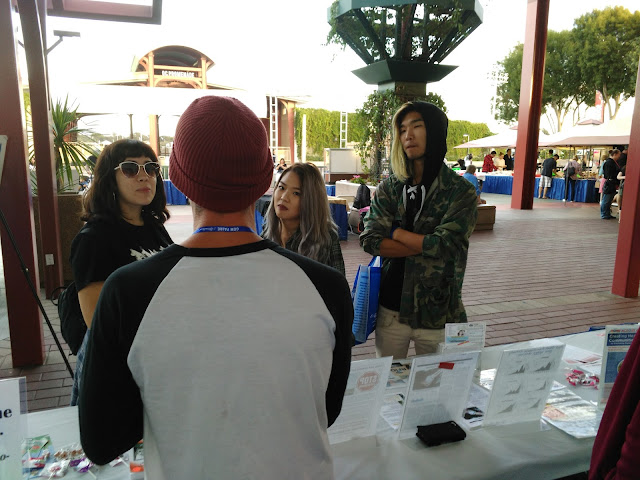 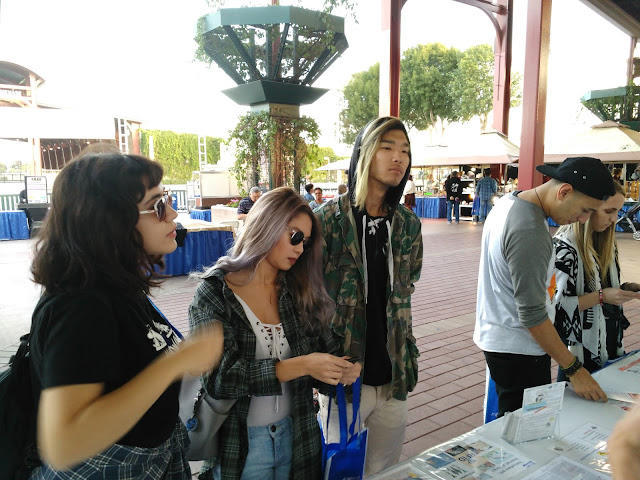 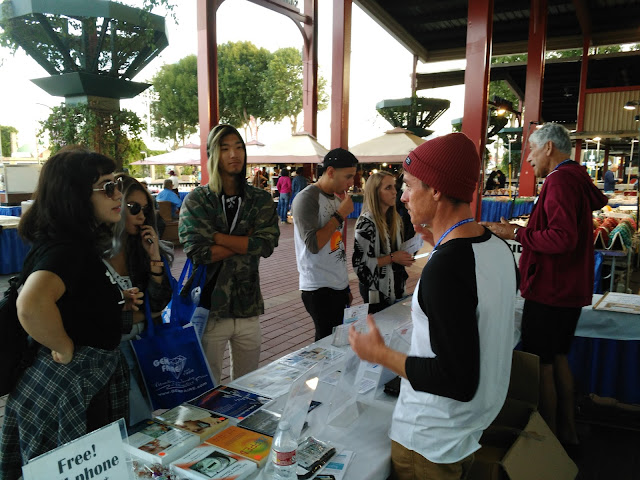 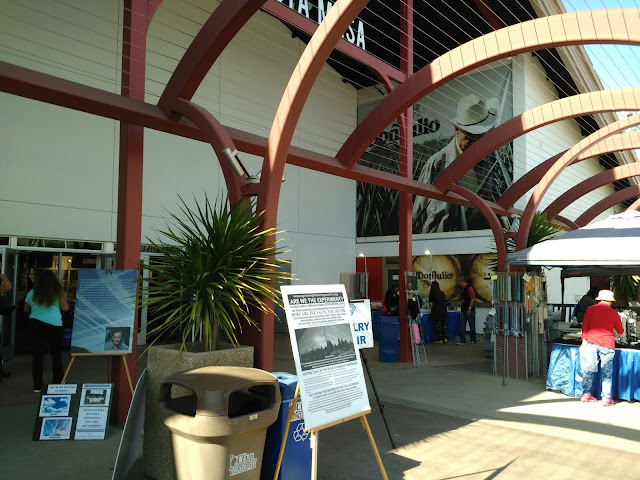 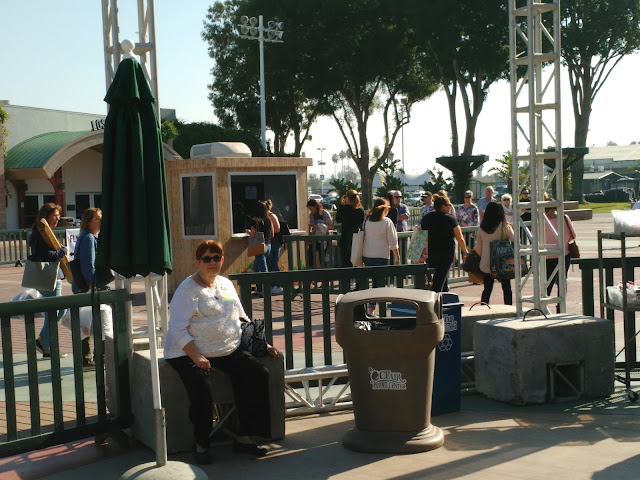 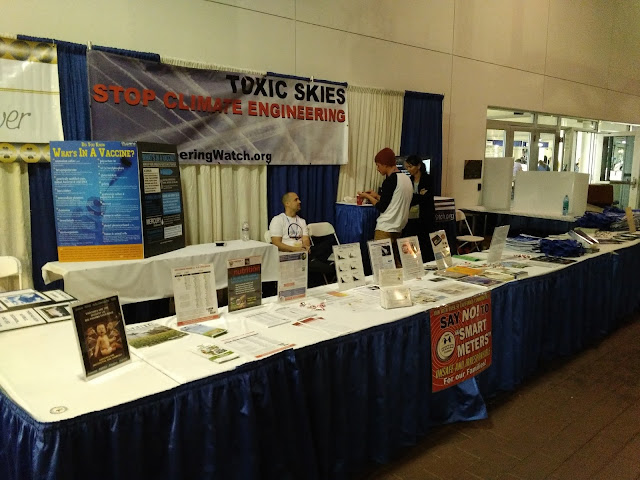 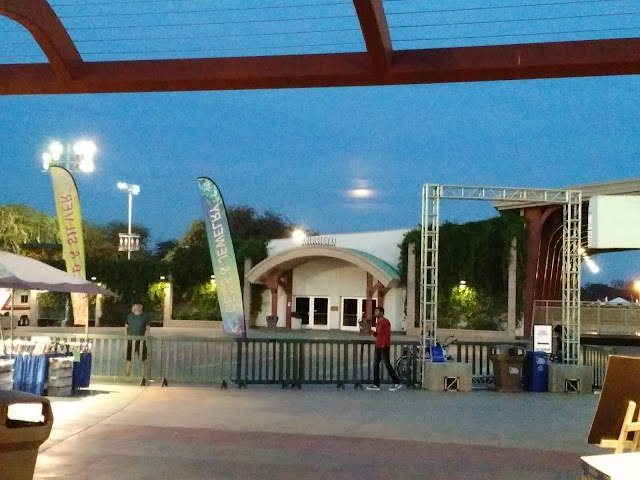 Always delivering a personal touch whether supplying a sounding board or possible solution. 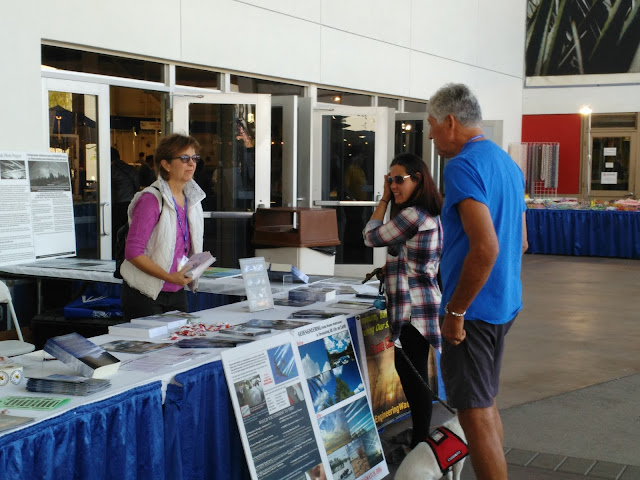 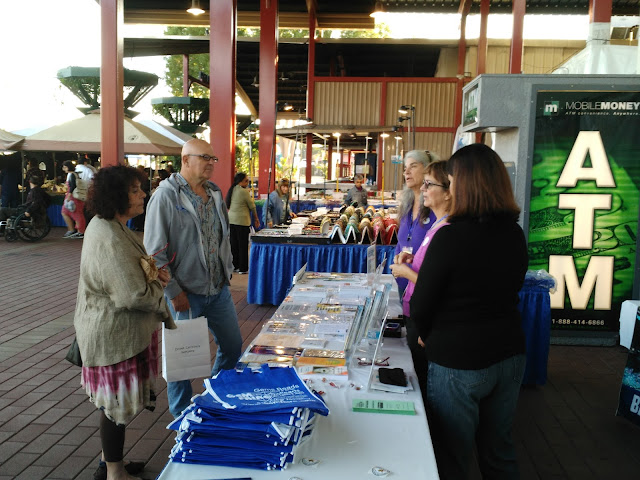 This Faire also brought four personally heard testimonials that the Geo-engineering table was the reason for their coming to the Costa Mesa event. An outside spokesperson inquired about members of our group coming to speak at a private engagement, and even the service dogs are hearing about the charge of the right brigade to deliver awareness. 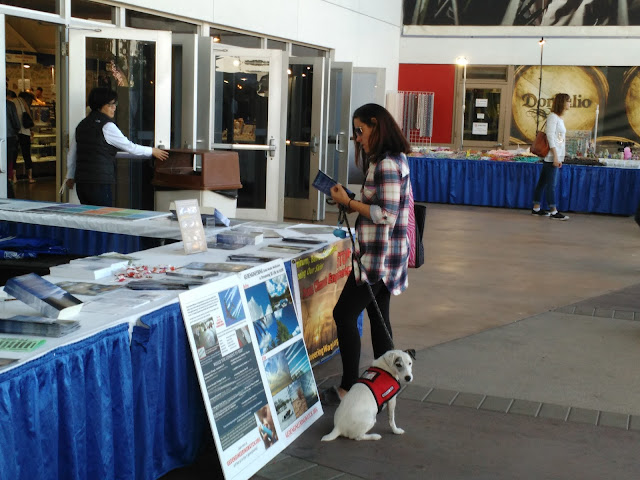 (*- Reported online ppv attendance to a 'dark web' live snuff event. Photos used were shot over the 3 day event and are meant to show continuity - Ed)
at 7:02:00 PM No comments: