A TALE OF TWO SCHOOLS -

BSC, CA – Strap on your skates, Gordie, we're going in for a strafing run. To understand last night's SRO* public info meeting that happened at Riverside's University of California, we need to look at all the angles, not just the neighborhood's Kevin Dawson, pictured in our lead in shot. But before we get to the back story, we'd like to take a moment to welcome new readers aboard. We have a Vice attitude with a LIFE Magazine eye. Plug's over, let's move on. 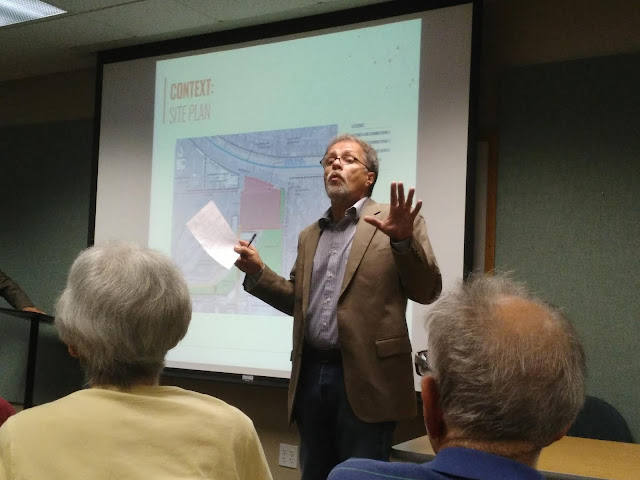 The concept is simple: take a selected few high school kids, the cream of the crop and place them in an educational hotbox, a spot for them to grow and prosper, as Spock would say. You then have this group of privileged kids, all genders/races, and put them in a pristine environment with college age peers for atmosphere. You isolate this space from the outside world and cater special transportation routes. Funds for this plan for architects, contractors, lending etc., all come online. Everyone is happy, right? That's the theory, like Darwin.

Well, we all know of Darwin and his theory. They give an award to the most inventive person, you could say, to garner the honor every year, but I digress. Putting a high school on a University campus, while very novel and forward thinking, has been tried before. San Diego did it with special testing and chose the most disadvantaged youngsters to enter this special concept. LA, a town that I love, but took a $1,000,000 in grant money from Skid Row [sleep on the sidewalks type of place] and put it instead for the bankers with privilege in Bunker Hill, rewarding the elite, went the other way in choice. Last night was the first 'preliminary' meeting to be held according to a neighborhood suit led by the guy in the opening picture. Small world or usual tactics? Make the jump.