WHEN HOMELESS HURT THE POOR -

BSC, CA – In the City of Los Angeles, there are 36,300 homeless people, and the county has a total of 58,936 for a total of 95,236 people. Though there are not as many homeless living in Riverside, those living here have managed to drive out a business that helps poor people get by; recycling CRVs, plastic, and glass. RePlanet closed all their remaining locations early in August all over California. The company, which laid off all their employees, stated economic reasons like the rising minimum wage and insurance, but was that really all of it? 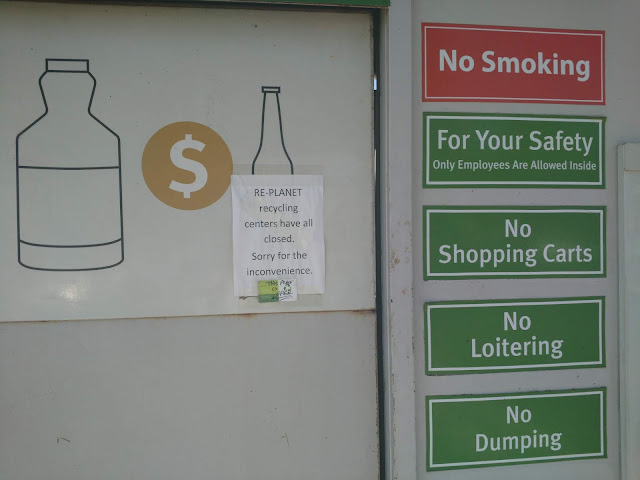 When I first moved to Riverside and took cans and bottles in for recycling, I could take a five minute bus ride down to the nearby Staters Supermarket. Depending on when you went, the line was usually a few people with loads of bottles. At first the people in line tended to be families, probably Christian who collect their congregation's empties from church gatherings. Over the months however, I noticed a change in those recycling. Also the supply side to keep the site printers working started getting sketchy. People with cars found more reliable sites, leaving the dregs.

The people in line the last few times at the nearby Staters were homeless, meth heads, druggies, sprinkled with just people who turn in their CRVs. The nearby supermarket quit taking the printouts of tickets, so the RePlanet site started issuing a cash refund. This required an extra person to be onsite as security. The people there now had tons of turn-ins, which always surprised me since you could sometimes tell a hookup, and you knew it wasn't pot that they were looking for.

I can't speak for any other part of town, but almost every time I go out riding the bus, I get begged for money. Most of them are not that old but they fall into several categories. Some are alcoholics, like the guy who begged money and after getting some change, made it straight away for a canned Steel at Rite Aid, the opposite direction from the bus stop. In 90 degree heat, all these poor folks are dressed like it is forty, usually pushing a cart [or three] full of stuff. 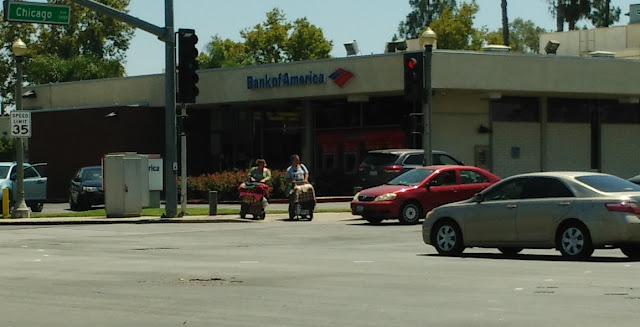 If you drive a car, it's questionable if you even see them, unless at a freeway entrance or exit. On a bus like the Route 1, which has a city long route, you can't miss them. Some are just passing through and some are regulars, but you see something that you learn in school about people. A regular got on. I've seen her before, always filthy, unkempt, and smelly, with a push cart. A young lady whom I have seen on several occasions, seems to have Elephant Man syndrome because she has growths of flesh on her side cheeks that look like locks of hair. Were it not for that one feature, she would look no different than any other clean, dressed student. I watched the smelly, filthy old woman point out the 'elephant man' lady to people on the bus one day. 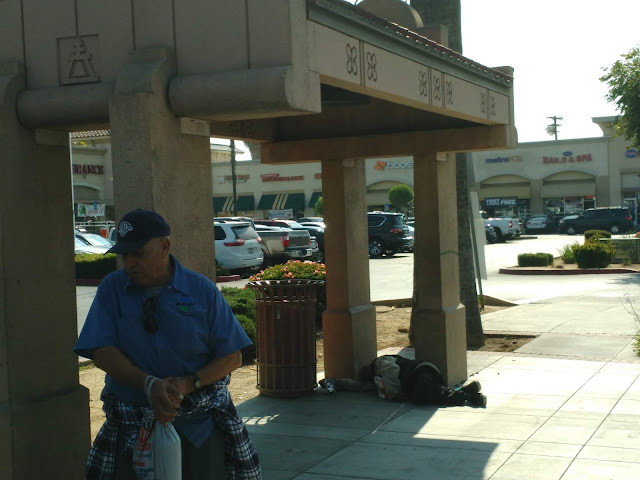 The problem of the homeless is a nationwide crisis but their problem becomes your problem when things change because of them, like the return of 'pay toilets' though you are more likely to see a sign that says this. 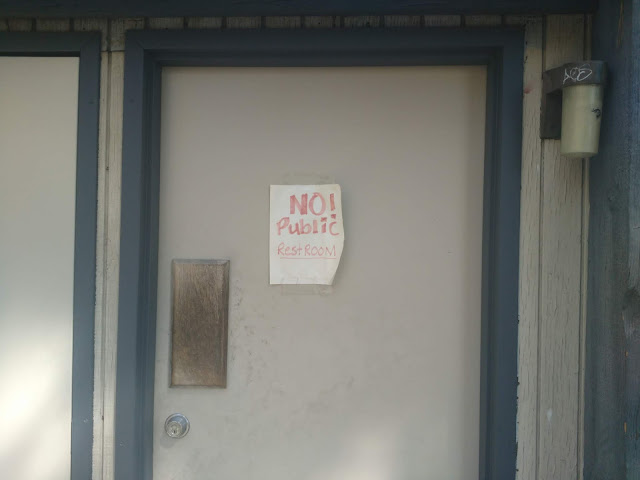 In Riverside you are starting to see 'no loitering' at the bus stops because of the homeless sitting on bus stop benches and causing buses to slow or stop to no avail. In fact, bus stop benches have been altered to keep the homeless from sleeping on them. In the process, even if a paying customer, your hips must be just so wide or you will have to stand or find a different place to sit. 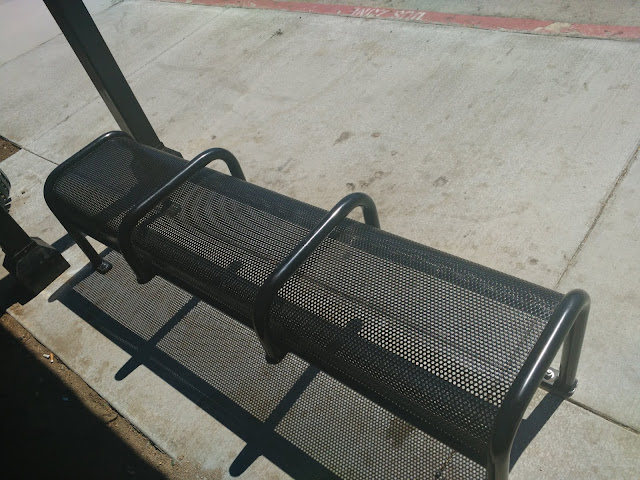 The 'no loitering or risk arrest' signs I started to see first, appeared around churches. WWJS? 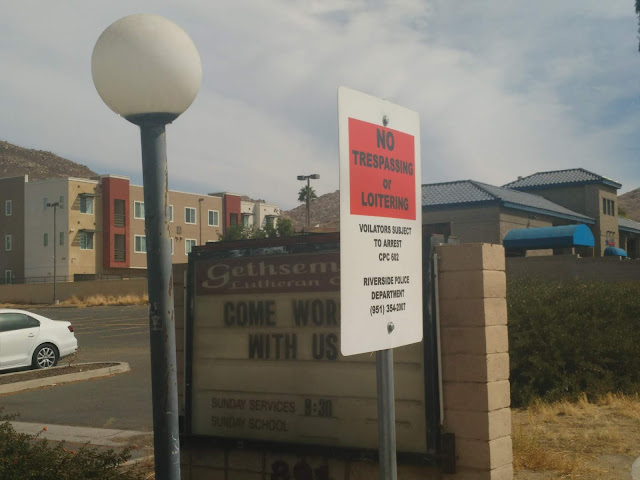 And there is one other consequence brought on by the homeless. 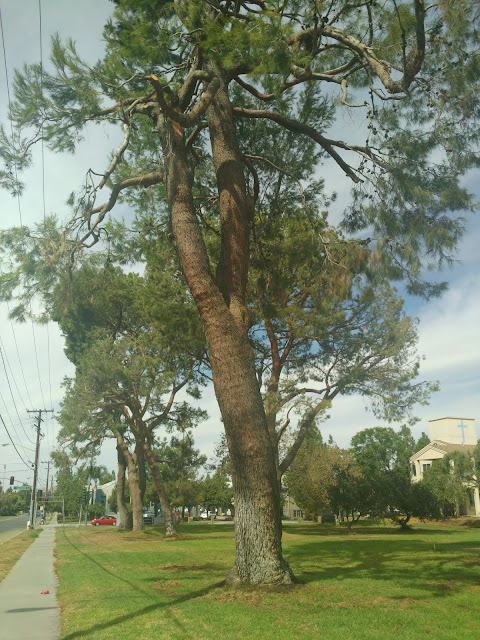 These trees, which used to have humongous canopies, went from looking great to being skimpy, as you can see. Trimmed back to a bare necessity, the trees no longer support any communities of birds. Oh well, you may say. Well Sports Fans, it becomes a little more personal when you realize that the trees are the lungs for the planet, and us. The ratio of usable Earth atmosphere is as a coat of paint on a basketball. That ain't much.

It isn't the duty of the state to care and feed the homeless, or even to house them. It is the purpose of the Church to care for the poor, poor of Spirit, Poor of health, and poor of substance. Remember, real life is just a bus ride away. It's in print, just like me. 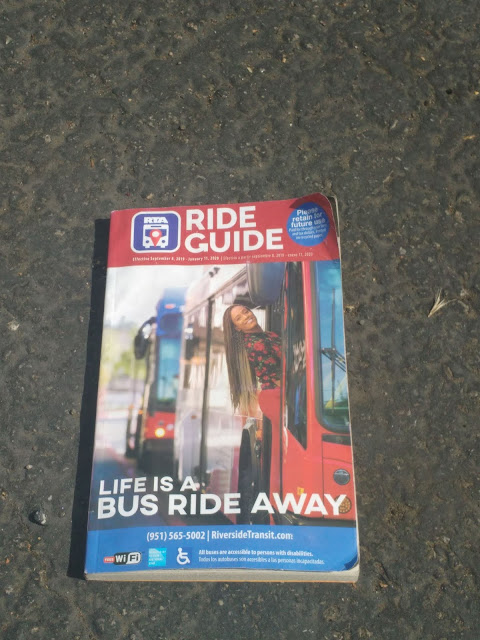